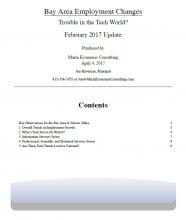 Bump in the Road for Silicon Valley’s Tech Sector?

Key Points
1)      Recent months have seen significant declines in year over year growth in the broader Silicon Valley’s technology sector.  The current yearly growth rates in the sector were last seen in July of 2010.
2)      Within the region’s technology sector, the declines are most pronounced in the Information sector and in the San Francisco MD.
3)      Job losses in the technology sector in recent months have been significant.  The information sector in the San Francisco MD, in particular, has been losing jobs at a 7.2% annual rate.

The technology sector[1] in Silicon Valley and San Francisco has a long history of volatility.  Figure 1 illustrates how wildly year over year growth rates in the sector can fluctuate.  During the dot.com boom, growth rates peaked in excess of 20% year over year.  Similarly, during the bust year over year declines reached nearly 20%.

Data recently released by California’s Employment Development Division provides evidence on recent changes in employment in the technology sector in what here is referred to as broader Silicon Valley: the combination of the San Jose MSA and the San Francisco Metropolitan Division.[2]

The data show a significant slowing in year over year technology employment growth in the region.  The slowdowns have happened in the past, most recently in 2013, followed by a significant recovery.  As in the past, the decline in the technology sector is accompanied by declines in the rest of the economy, in particular, the retail sector.

The slowing in year over year growth rates is a result of relatively rapid declines in tech sector employment in the region over the last several months (Table 1). These declines are concentrated in the information sector (Figure 2) and the San Francisco MD.  Information sector employment in the San Francisco MD has been falling at a 7.2% annual rate since it peaked in October.  That is an alarmingly rapid rate of decline. 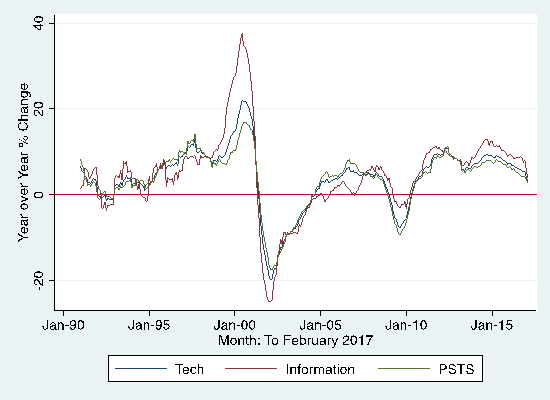 Though there is no reason to believe that these declines portend a recession in the region, but they are worth watching in the coming months.  The next release by EDD will be very telling with regard to the regional tech-driven economy and where it is headed.

[1] The technology sector here is defined as the combination of the Information (NAICS 51) and the Professional, Scientific, and Technical Services (NAICS 54) sectors.

[2] This includes San Francisco, San Mateo, Santa Clara, and San Benito Counties.  It is not possible to remove San Benito, but it has roughly 500 jobs in the tech sector, so is of relatively little consequence in this context.